Is My Backyard Becoming a Zoo?

Blame it on Little Red Riding Hood but I have always had a deep concern about any animal with teeth longer than mine! And while I expect to see potentially problematic wildlife in remote rural areas or national preserves, it is very unnerving to see them in my backyard.

Backyard, you say!?? One day in April, 2020 my husband was looking out our kitchen window and called out to me, “There’s a big dog loose in the backyard.” Quickly checking it out and concerned as to how to deal with it, I initially thought it was a German shepherd. Snapping several photos, we eyed each other from a comfortable distance until the animal vanished into a neighboring yard. 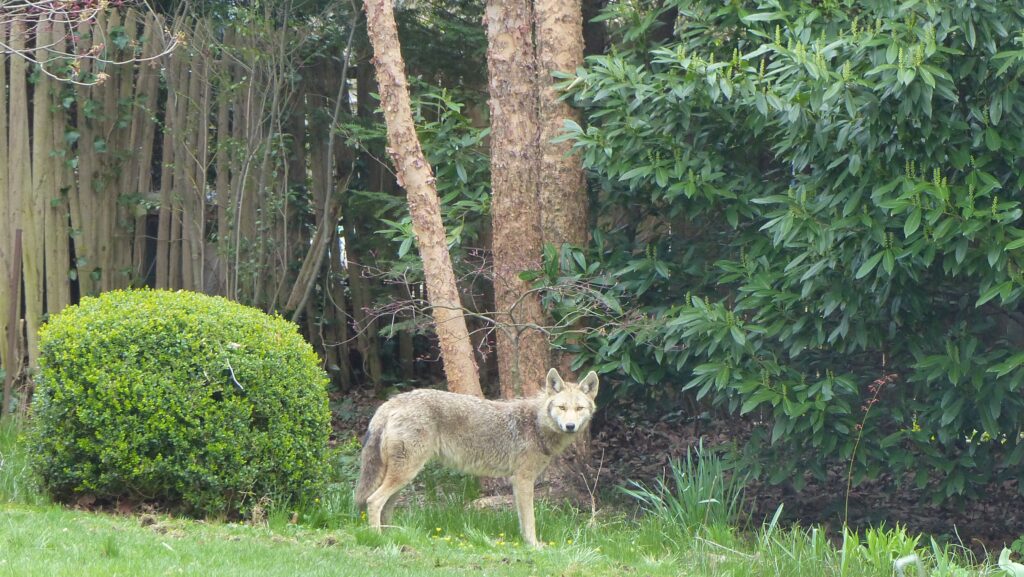 The animal identification did not seem quite right and, indeed, that was no German shephard. It was actually a coyote!

I must admit that I have heard vague rumors about coyote sightings over the years but, while intrigued, never looked into it. Now, going through back issues of the Riverdale Press, I have found reports going back to 2009.

Indeed there is even a statue at the southwest entrance to Van Cortlandt Park commemorating the 1995 first confirmed sighting of a coyote in NYC since 1946. That coyote was killed while trying to cross the Major Deegan Expressway. Coyotes are believed to live in Van Cortlandt Park and Riverdale Park.  It seems that they had already been seen in Woodlawn Cemetery in 1994 but not reported. Since then coyotes have be found throughout New York City and are now permanent residents of Long Island.

The statue was the brainchild of Ricardo Hinkle, a landscape architect for the Parks Department. The Modern Art Foundry in Astoria, Queens hired Glenn and Diana Hines to do the actual work.

While we have generally been oblivious to the coyotes’ arrival, there is research group devoted to their present circumstances  – Gotham Coyote founded in 2010. “This  (group) is a collaboration of researchers, educators and students from institutions around the region working together to better understand coyotes and their role in our urban ecosystem.”   In fact, Wave Hill has participated through its Woodland and Ecology Mentorship program  in trying to establish a count of animals.

Coyotes Have Many Relatives

The name of this mammalian family – Canidae – is derived from the Latin canis meaning dog. In addition to the coyotes (Canis latrans), canids include our domestic dogs (Canis lupus familiaris), wolves(Canis lupus), jackals (Canis aureus), foxes(Canis aureus ) and dingoes (Canis lupus dingo), 34 species altogether, spread over 13 genera. The smallest canid, at three pounds, is the fennec fox (Vulpes zerda) of north Africa and the largest is the gray wolf (Canis lupus) native to North America and Eurasia, which can reach 175 pounds.

The Canidae  appeared in North America during the end of the Eocene epoch which ran from 37.8-33.9 million years ago and they reached Eurasia in the Miocene (23-5.3 million years ago. They seemed to have evolved in North America and migrated first through the Bering land bridge linking North America with Asia; later family members migrated to South America during the late Pliocene (5.3-2.9 MYA)  when the Isthmus of Panama appeared. It is hypothesized that the Bering land bridge emerged during  Earth’s cold cycles when sea level fell as its waters were locked up in glaciers. The creation of the Isthmus of Panama is a much more complicated one involving tectonic processes of plate movement and volcanism.

Coyotes were not native to  the eastern United States but they began to spread out as the gray wolf was hunted down thereby allowing them to become the top predator. They are very adaptable animals and, fortunately for us, are not particularly interested in urban garbage. Their natural diet is extremely varied and can change with the seasons as different options become plentiful. This information is clearly evident by examining their scat.

So what is scat? In fact, it is fecal material deposited by an animal for the usual reasons or to help mark territory. While not very esthetic to us, it is useful in several ways. Shape of scat is indicative of the animal that excreted it. In addition, when examined carefully, scat tells us what the animal ate. Photos taken in Texas from October through December show a monthly progression of available diet. Early October  scat was full of grasshoppers,  mid-October showed grasshoppers, seeds and animal fur, early November showed vegetable remains, while later in the month they contained mesquite seeds and seed pods. By end December, the feces were filled with fur indicating that the diet was then including small mammals. 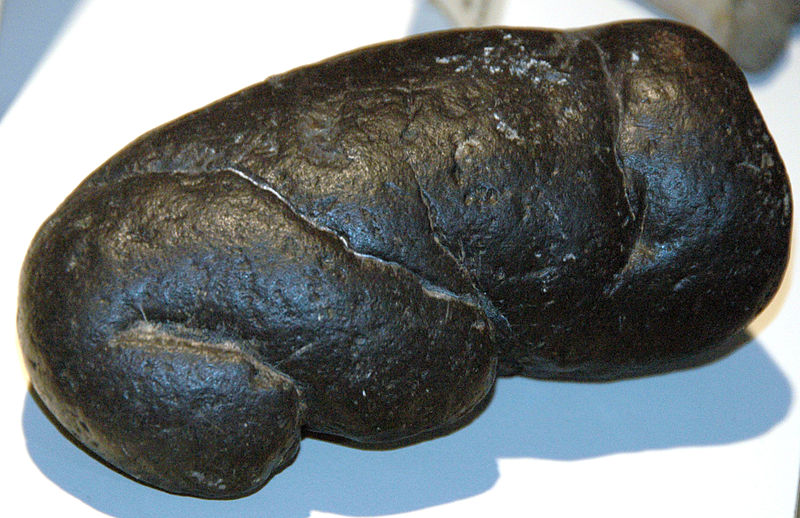 Incidentally, coprolites are fossilized dung and are likewise useful to enlighten us as to the diet of ancient animals. A clue that a fossilized find is indeed a coprolite and not some kind of mineral look-alike (called a pseudocoprolite) is the inclusion of plant or animal parts.

Coyotes are not strictly nocturnal and may be seen during daylight hours. They do not live in packs like wolves do but rather, lead their adult lives as couples since they mate for life. Gestation lasts about 62 days after successful mating, which occurs in January, so that birth usually takes place in March /April. The 4-6 pups in the litter are weaned at 5-7 weeks and will stay with their parents  becoming more independent with time. As they become adult in their first year they are dispossessed by the parent couple between October and January and are, thereby, forced to find their own mate and an empty territory where they can live and breed.

Total population numbers in New York State are not completely clear. Chris Nagy of Gotham Coyote shared this information: “ In NYS (New York State) the DEC(Department of Environmental Conservation) thinks there are between 20,000 and 30,000 coyotes across the whole state. In NYC, we think there are likely around 20. That number oscillates a lot, as they can have a lot of pups but most of those die or emigrate after leaving their parents. There are also likely a good number of coyotes that come and go from Westchester, traveling back and forth as they look for new territories, mates, etc. More useful, I think, is the number of permanent territories that are ‘held’ by a breeding pair, i.e., representing coyote families.  We know of 4-5 breeding families in the whole City, with a few sites that have just one individual living by themselves. That’s where I get the guesstimate of 20 from: 4 to 5 pairs, plus pups or juveniles that haven’t left yet, plus a couple more ‘wanderers.

How to View our Coyotes

The burning question meanwhile is, “How safe is it to have a large predator in relatively close association with people?” Coyotes are omnivores and will eat fruit, small mammals, birds and deer. The real problem involves the issue of small mammals placing small children and pets at risk. However, it is recommended never to leave food around – even if it is for other animals such as feral cats –  or to ignore the fact that these animals will hunt. Hazing – referring to making noise or disturbances – is a way of keeping them from habituating to our human presence.  Check out the YouTube video on the subject.

All that being said, coyotes are predators  and  “the Environmental Conservation Law allows ‘problem coyotes’ to be killed. Section 11-0523 says coyotes that are “injuring private property may be taken by the owner, occupant or lessee… at any time in any manner. “The proper wildlife officials can be contacted at: wildlife@dec.ny.gov. Alternatively, there is a list of Bronx Licensed Nuisance Wildlife Control Operators.

I am ambivalent about our local coyotes. On the one hand anything that eats rabbits and doves is not all bad. On the other hand, I would rather not encounter a predator – even a shy one – in my own back yard!

If you have enjoyed this blog, you might enjoy my book A Habit of Seeing: Journeys in Natural Science. 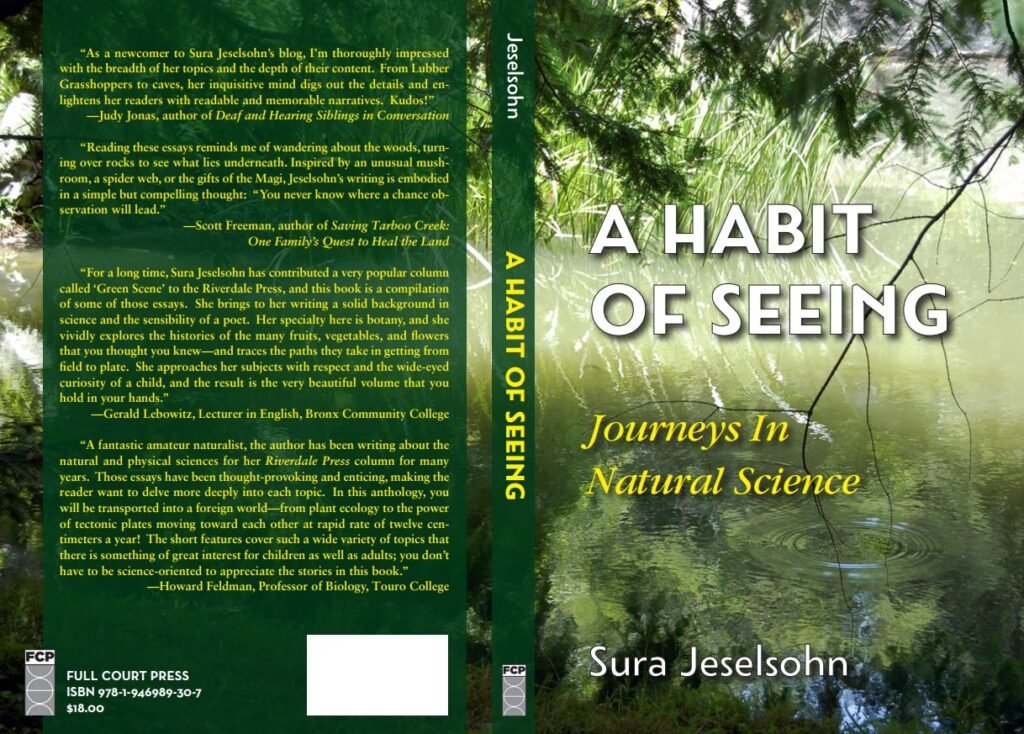 3 thoughts on “Outdoor Guests – Coyotes! You Have Got To be Kidding!!!”